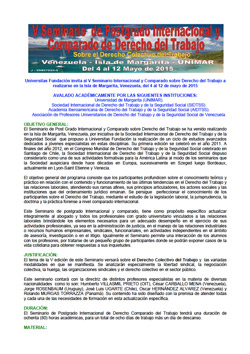 You can find the final agenda of the Seminar of Isla Margarita in the Spanish version.

The Postgraduate Seminar on International and Comparative Labour Law of Isla Margarita has been on-going since 2011 under the organization of the Fundación Universitas and under the auspices of the Venezuelan chapter of the ISLSSL, which has awarded scholarships with a view to promoting the participation of young lawyers.

From the forthcoming edition, and as announced during the last meetings of our Executive Committee and the General Assembly (Santiago, Chile), we would like to deepen our relationship with the aforementioned seminar.   This renewed relationship will be based on the creation of an International Advisory Committee, composed of representatives designated by each of the Latin American national associations of our society. Its role will be to act as a consultative body at the time of organising each seminar and when deciding on the granting of ISLSSL fellowships.

As far as the design of each seminar is concerned, the organizers should consult the  Committee before the elaboration of the program – topics, speakers, activities, etc. – or to submit the draft programme to the Committee, for evaluation and suggestions as well as the request for fellowships.

The invitation to be part of the International Advisory Committee for this Seminar has received a large response from our Latin American societies and its composition is the following:

Having agreed on this occasion to assign fellowships of U.S. $1,000 each, we will proceed to the establishment of a fellowships subcommittee with a maximum of five persons to be selected from Committee members (as far as possible) and among those national societies which have not submitted candidates for fellowships, with a view to ensuring maximum transparency and integrity for the selection of candidates.

The submission of applications for scholarships should be carried out by the respective national association, accompanied by a curriculum vitae of the applicant and certifying compliance with the ISLSSL rules for the granting of fellowships.

The application process is now open and the deadline is January 31, 2013. Information on the seminar is available at https://www.universitasfundacion.com/v2.0/eventos_detalle.php?codigo=MTcy