Attendees will receive a complimentary membership of the Society until March 2021 if are non-members at present.

If you wish to attend, please register below.

You will be sent a link to join the Microsoft Teams meeting. If you do not have MS Teams, please note that you will still be able to join the event via the web and do not need the application installed.  For more info, check this short how to video https://www.youtube.com/watch?v=316Bb8cgHMw

Please note registration for the event will close 3 hours before the event starts.  Should you still wish to attend, please send an email to clare@saslaw.org.za so that we may assist you.

We look forward to your support.

Article 1, par. 2 of the Statutes of the Society says:

«The activities of the Society include the promotion of the study of labour and social security law amongst young academics and lawyers, and support for international comparative schools, seminars and other meetings in those fields.»

Pursuant to this statutory mandate, our purpose is to encourage the participation of young lawyers in ISLSSL activities. We would like to encourage their attendance at conferences, through reduced attendance fees. We would also like to create a section on our website where they can share their research. We encourage the creation of awards for younger scholars (granted by the organizing committees and the ISLSSL), as well as the formation of teams of young lawyers to assist the General Rapporteurs in preparing their reports. There should also be seminars organized for young lawyers as part of their training and agreements negotiated with prestigious universities that offer more extensive programs on labour law and social security (for example, the ISLSSL should facilitate academic exchanges among its members for candidates nominated by national associations that meet the requirements established in each case). In this regard, we invite our members to provide ideas and proposals for achieving these objectives.

In particular, we would like to pursue the idea of the Report of the Working Group, to encourage the creation of a Section of young academics and lawyers in our Society. The creation of such a Section is extremely important though not simple. To make  this  possible,  we  thought  it  appropriate  to  encourage  the  establishment  of regional «branches» that would facilitate the initial organization and that would enable their merger into a single international section. The first branch are being established in Latin America and Europe.

We have asked a number of young Latin American researchers to take the initiative of setting up a branch of young scholars/lawyers using their own list of contacts. In each of our Latin American countries young researchers have already expressed interest in participating[1]  with a view to organising at the regional level. Those who would like to join the branch are requested to contact Juan Pablo Mugnolo (jmugnolo@yahoo.com.ar), who is coordinating this initiative.

The members of the Latin American branch have expressed interest in holding their first meeting during the Regional Congress of Labour Law and Social Security to be held from 2 to 4 October 2013 in Guayaquil, Ecuador. On that occasion, they aim to produce research papers and discuss the degree of changes to the «employment relationship» over the last decade, characteristic of most economies of the region. This research will try to identify some trends (expansionary, contractionary) in the field of labour and social rights, and if possible, establish a link between these trends and future economic growth.

The European dimension of labour law, as it is known, is characterized by strong integration among national legal cultures, supported significantly by the action of the European Union. Moreover, there are parallels in the development of various national laws despite sometimes significant legal differences.

A comparison of the realities of emerging EU countries is increasingly important and dynamic as is the need to meet the new requirements induced by the demands of competitiveness and sustainability due to the economic crisis that has characterized a number of European economies in recent years. These transforming factors suggest the need for continued reflection on the past, present and future of labour law in Europe.

Scholars of all generations are needed for this phase of reorganization of our scientific discipline to develop initiatives that can best consider cross-cutting issues within Europe, such as the theoretical foundations of labour law, the role and powers of trade unions and collective bargaining, the form and degree of legislative protection afforded to workers, the very notion of «worker» as the mode for qualifying for protections provided by labour law, social security and welfare systems.

There are many instruments at our disposal to assist in these reflections: news of new legislation, publications, conferences and seminars, promoting the call for papers and collections of studies, organizations of congresses or congresses sections.

This initial phase, undertaken by a first group of scholars, will see the creation of an online forum open to all young European labour lawyers with the aim of defining the most effective initiatives for starting a program of common research and deeper reflection.

University students who are engaged in research fields of comparative labour law and who are interested in joining this European branch of young ISLSSL lawyers, at this early stage of discussion (which will continue until the end of next March) may contact Prof. Stefano Bellomo (stefanobellomo@mmba.it), who is gathering a list of initial participants (young scholars from Italy, France, Spain, UK, Poland, Russia, have expressed interest and others have been contacted)[2] and is organising the first phase of this collective reflection on the development of new tools for comparison and discussion.

All this is being conceived by young lawyers in an independent manner and they, for the moment, are responsible for the regional integration of these «branches.» The Regional levels should eventually merge into an international one that will seek to achieve the full realization of this initiative. Its sustainability will depend on the enthusiasm and dedication of the young lawyers of each Section.

We  invite  our  colleagues  from  other  regions  of  the  world  to  establish «branches» for subsequent merger into a single entity.

As expected, the «internationalization» of the academic activity of young lawyers will contribute to the enrichment and improve the quality of our Congresses while encouraging membership in the respective national societies. 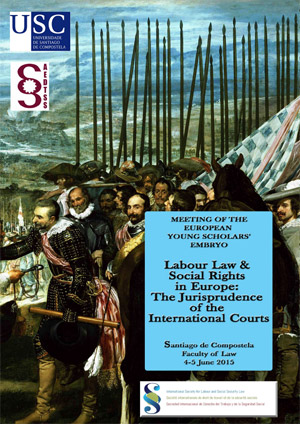 This meeting of the European YS Embryo is the continuation of the session held in Dublin in September 2014. There, all the Young Scholars who attended it confirmed their gladness and satisfaction and their will to being involved in the future activities related to the European embryo and of the future ISLSSL Young Scholars’ Section. The same availability and willingness have been expressed by many scholars who attended and appreciated the contents of the meeting.

Implementing these intentions, the meeting in Santiago de Compostela will have two aims.

First of all, a scientific objective, the exam of the jurisprudence of supra-national courts, a meeting point for all the countries of the European area (Austria, Belgium, Belarus, Bosnia Herzegovina, Bulgaria, Croatia, Czech Republic, Denmark, Finland, France, Germany, Greece, Hungary, Ireland, Israel, Italy, Lithuania, Luxembourg, Netherlands, Norway, Poland, Portugal, Romania, Russian Federation, Slovenia, Spain, Sweden, Turkey and United Kingdom). Thus, a common field for debate is easily found, as the same decisions from these Courts can have very different impacts on each country. The mechanics of the meeting are based on debate, following the successful model already implemented twice by the Spanish Young Scholars’ Section. Short dual presentation of 10 selected rulings will be followed by open, wide debate, free of the formalities of a Major Congress, and with a good deal of time to talk without restriction.

The second aim is an organizational aim. The World Congress in Cape Town, September 2015, will be the birthplace of the ISLSSL Young Scholars’ Section, joining young scholars from the entire World. The meeting in Santiago will be the occasion for brainstorming and sharing ideas for a possible European Regional subsection and further collaborations in the future.

Participation will be possible in this Meeting under two roles: discussant and attendant. The discussants, in couples, will expose the judgments to open the debate. Each National Association affiliated to the International Society of Labour and Social Security Law will propose one or two discussants, up to 20 participants; the nomination will be communicated to both stefanobellomo@mmba.it and josemaria.miranda@usc.es before the 10th March 2015. If this number is not reached, an open call for discussants will be made, and a number of grants will be distributed, according to a merit-based selection process managed by the ISLSSL, to fill the number of 20 discussants, coming from the indicated countries from the European area. In any case, no more than one discussant per country will be selected according to this second procedure. The choice of the rulings will be made though the YS website (https://www.euryoungscholars.unimi.it/) under the supervision of the ISLSSL, during the month of March.

As attendants, each National Association can appoint a wider number of representatives according to its own rules – no grant will be given to them by the ISLSSL. Furthermore, the attendance to the academic session and to the debate is open to each Young Scholar who is interested in studying the issues that will be examined and debated in the Seminar. Attendants are invited to engage in the debate following the exposition by the discussants. Of course, attendants from extra-European countries are welcomed to participate in the meeting.

Anyway, the organizers wish that the Seminar could represent an occasion for the National associations to establish and promote the activity of the respective national Young Scholars’ Sections.

The working language will be English and the dress code is casual.

The ISLSSL will give a grant of 50 Euros to each of the discussants, up to two per country, with a top expenditure of 1000 Euros.

Please, make a bank transfer to:

In order to guarantee the university accommodation, the total amount of the registration and accommodation fees has to be paid before April 30, 2015. Please mention YSM-USC and the full name of the participant in the bank order. Payments must be made in Euros. Possible transfer fees are on the participant’s charge.

Each couple of discussants from two different countries will study one recent ruling of an international Court, as e.g. the ECJ or ECHR (10 chosen beforehand in collaboration with the organization), talk about it for 15 minutes and a general discussion will follow.

Sarvani Morgan, Labournet; Nic Preston, Cliffe Dekker Hofmeyr; and Neil Searle, Fasken Martineau are members of the SASLAW Young Legal Scholars society.  This team has been active in recruiting student memberships since the beginning of 2014.

The SASLAW national committee has sent out a call to the Durban, Cape Town and Port Elizabeth chapters to appoint a young scholar/attorney to the national YLS committee.

The Greek Association of Labour Law and Social Security has informed us that they have created a Young Scholars Section under the coordination of Mr. Jean Skandalis. You may contact Mr. Skandalis at the following email address:  iskandal@law.uoa.gr